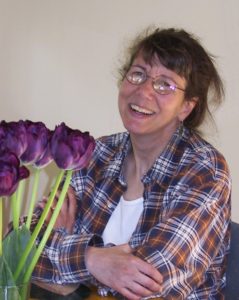 Guild Master Sandra Z. Richardson passed away in the loving presence of her family over the Christmas holidays in 2014.  Memorials given in Sandy’s name established the Sandy Richardson Memorial Scholarship Fund, which continues to provide help to folks who want to participate in Guild offerings but cannot afford to do so.

If you would like to donate to the scholarship fund by credit card, you can do so in the form below.

If you would prefer to donate by check, write “Scholarship Fund” in the memo line and send your tax-deductible contribution to:

If you would like to be a recipient of a Sandy Richardson Scholarship, please contact the Guild Director at [email protected]

An excerpt from Sandy’s obituary:

Sandra Zeiset Richardson of Seattle, Washington passed away on December 27, 2014 surrounded in love by her husband, family and friends.  Sandra was born April 30, 1957 and was raised in Bechtelsville, PA. Sandra met her husband Stan while living in Colorado. They were married in Seattle in 1981.

Sandra attended Eastern Mennonite College and the University of Washington, graduating in 1985 with a BA in Art Education. In 1988, she and her husband Stan became the directors of Camp Camrec, a Mennonite retreat center near Leavenworth, WA. During that time Sandra became associated with the Grunewald Guild, an art/faith community nearby. For the three years she lived at Camp Camrec, Sandra worked on her art in the Guild studio and made many long-term connections with that community. She later returned and both attended and taught classes during the Guild summer program. In 2005 she was named a “Guild Master” – persons whose work and life have become a ministry and inspiration.

In 1990, while still living at Camp Camrec, Sandra was diagnosed with multiple sclerosis. This began her long journey living with a chronic disease but it did not break her spirit. Though the disease would ultimately limit her abilities and end her life, she lived fully during her time. Her roots as a Mennonite contributed to her love of community, and of peace and social justice. This also informed her artwork in many ways.

Sandra was an artist at heart and saw the world in a different way. Her artwork was narrative and figurative, covering many subjects from humor to political justice, personal introspection to social commentary. She worked primarily in ceramics but also printmaking, painting, and metal sculpture. Her distinctive figurative style is immediately recognizable. Her artwork has been shown in several Seattle and national galleries over her more than thirty-year career and is in numerous private collections, museums, and institutions.

Stay Connected with the Guild